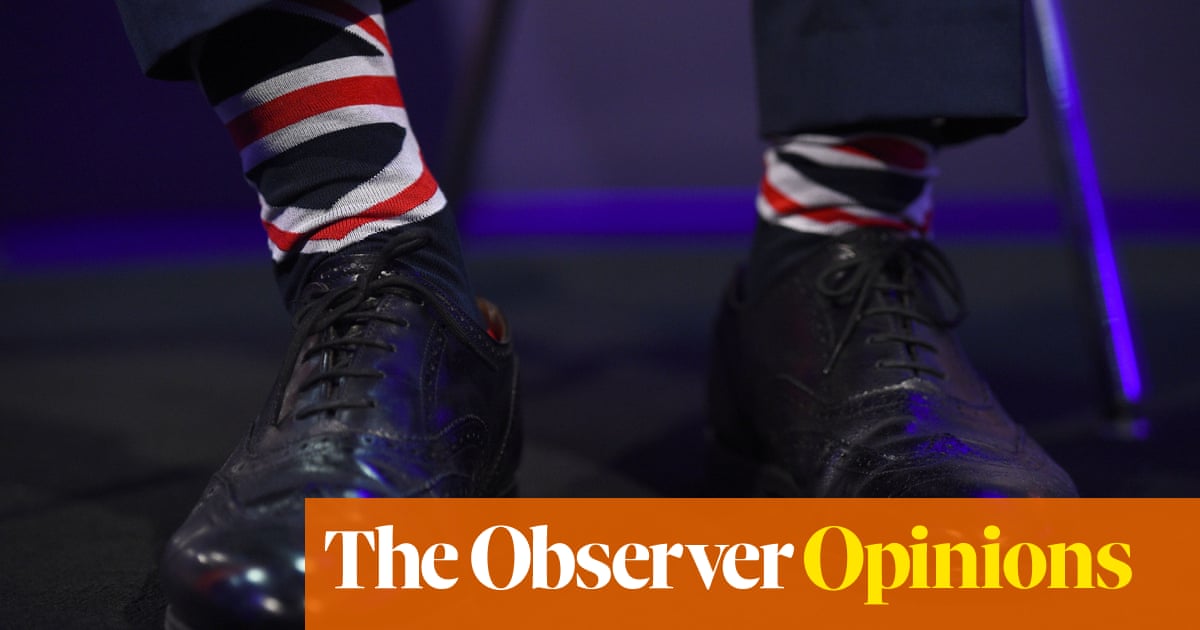 Brexit’s wounds will always bleed. Britain cannot “go back to normal” whether a deal is done or not. Normal in Britain now is a civil war without the bloodshed. The warring parties cannot sign a peace treaty and pretend the fair-minded, sensible Britain of the national myth will carry on as before. That land is dead and gone, however loudly our trash prime minister tries to atone for his guilt with promises to “bring the country together”.

The language of war has been the language of Brexit. The right raids the dressing-up box for Battle of Britain uniforms. The prime minister damns half the population as quislings advocating betrayal and surrender. Dominic Cummings’s hero Bismarck fought three wars to unify Germany. Cummings talks as if he’s ready to unleash one to break up Britain. Paranoid fear of enemies within, once confined to the rightwing press and far-right politics, now defines British conservatism.

Call Conservatives far right and you must expect the sound of wailing. “You can’t compare the Brexit referendum to Trump’s election,” they declare. “You can’t say it’s racist to worry about immigration.” “You can’t say Farage and Johnson are extremists.” For people who say they believe in freedom of speech, Britain’s Conservatives exhibit a neurotic compulsion to police debate.

For all their censorious cries, Conservatives once believed in small government, the avoidance of ideological frenzy, and tradition. Now they do not. In 2005, the authentically Nazi British National party stood on a manifesto that said nothing should stop us leaving the EU. Britain must “maintain sovereign physical control of its borders” and all that is stopping us taking back control are the lies of “the political and liberal media elite”. Yesterday’s BNP manifesto is today’s Conservative party platform.

Johnson says he is a “liberal Conservative”. Yet the voters he needs are anything but

As Paul Stocker says in his history of Brexit and the mainstreaming of extremism, the far right’s broader worldview is the new consensus. The “nation” is the be-all and end-all in politics. Foreigners, whether migrants or EU leaders, are the scapegoats for every failure. The “people” is no longer composed of all your fellow citizens. Membership is confined exclusively to those who doff their caps to nationalist politics. Meanwhile, you only have to listen to Johnson to know that the far right’s paranoid style has become the Conservatives’ style. The default position of its politicians and journalists is to rouse the rabble by depicting parliament, the judiciary and the civil service as sinister forces conspiring against their own country.

Cliches about riding tigers, genies and bottles and Pandora and her box are unavoidable, I’m afraid. The snobs won’t be able to control the mob they have unleashed, even assuming they want to. Johnson says he is a “liberal Conservative”. Yet the voters he needs, and the only voters he is likely to get, are anything but. He must appeal to them or lose. Brexit certainly did not mean Brexit to millions who voted for it. Every study of their attitudes emphasises a majority support for Brexit as being bound up with opposition to multiculturalism, feminism that’s gone too far and immigration. Brexit’s leaders have primed them to see all obstacles as an elite plot. If they tell them to calm down, they will not be heeded. In their recklessness, the leaders of the right have thrown away the ability to instruct their followers to respect the rule of law and parliamentary democracy.

Almost daily, Nigel Farage explains why the Brexit war can never end. Watch his speeches and you see Farage treating Johnson like a dominatrix treats a submissive. He pets him at first and calls him “Boris”. He praises the “panache and optimism” Johnson has brought to Downing Street. He coos over Johnson’s promise to get Brexit done by 31 October and simpers when Johnson says he would rather “die in a ditch” than break his word. And then comes the promise of pain. Already “half to three-quarters of Tory MPs” are traitors in Farage’s mind. If Johnson sides with them, if he “marches people to the top of the hill” and brings them back down again by refusing to allow a no-deal Brexit, Farage will crack the whip and his party will split the Tory vote.

I look around at my fellow Remainers and see no easy route to national reconciliation on our side either. They (we) know that a majority now supports staying in the EU. They (we) believe that Brexit is at once a grave attack on the national interest and a frivolous distraction that makes our old problems worse while bringing new troubles. Whatever happens, they (we) will turn the Liberal party into a pro-European campaign group and do the same to Labour if we get the chance. Every job loss and business closure, every university without teachers and every hospital and care home stripped of staff will be hung round the necks of the Brexit frauds. And they (we) will say: “You never promised the people this.”

For whatever you think of the Remain case, you should accept that, out of stupidity and mendacity, the proponents of Brexit never spelled out the hard choices. Either we protect the economy by submitting to EU rules we have no say in making (in which case, why leave?) or endure a hard Brexit (which will hurt like hell). That choice will never go away for as long as the EU exists as a law-making body.

Supporters of Brexit can duck their failure to tell the truth about the pain they said would never come by creating enemies and denouncing treason. If they persuade enough of the country it is at war, they can dismiss the wishful thinking and outright lies they peddled as irrelevant. In wartime, we expect civilians to bear some of the suffering. Only fifth columnists undermine the people’s morale by saying the sacrifices are self-inflicted. From the right’s point of view, a war without end is preferable to a career-ending acceptance of its responsibility.

• Nick Cohen is an Observer columnist