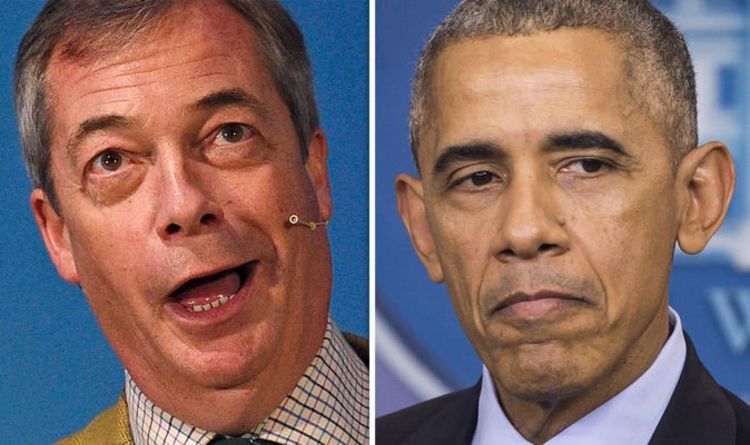 Two months before the Brexit referendum, former US President Barack Obama visited London and warned Britain that a trade deal with the US would not be a priority if British voters chose to leave the EU. Mr Obama said: “The UK is going to be in the back of the queue.” At the time, his remarks were furiously criticised by Brexiteers, who suspected then-Prime Minister David Cameron’s Government to be the mastermind behind them.
They pointed to the President’s choice of the word “queue”, rather than the American usage of “line”, as evidence of British involvement in scripting Mr Obama’s comment.

One of the people who reacted with fury to the comments was Brexit Party leader Nigel Farage, who had previously warned Mr Obama to “mind his own business”.

A month before his visit, Mr Farage alongside five other eurosceptics penned a letter in which they urged the former US President to leave the decision to the British people.

The letter stated: “With so much at stake, it is imperative that the question of exiting the European Union is not one answered by foreign politicians or outside interests, but rather by the British people who must ultimately live with change or the status quo.

“While it is understandable that a sitting US president feels the obligation to speak in the interest of the United States, it must be advised that even a passive diplomatic recommendation in the matter of our national decision will receive the opposite of the intended effect.

“The referendum vote is an act of democracy in its most direct form, and the question of whether or not to leave the EU is a rare political topic that is not owned by any one political party.

“This is a chance for the British people to choose the path of their country.”

The letter added: “As fellow elected representatives we would therefore respectfully ask that you refrain from further politicising this debate by intervening in our approaching referendum and instead allow democracy to take its course.”

The five MPs who signed the letter were Tories Peter Bone and Tom Pursglove and former Labour’s Kate Hoey and Kelvin Hopkins, and Sammy Wilson from the Democratic Unionist Party.

Mr Obama ended up ignoring the warning but according to Vote Leave insider Lord David Owen his visit was actually crucial to winning the Brexit referendum.

In an exclusive interview with Express.co.uk, the former Foreign Secretary and SDP co-founder explained: “I was quite convinced we would win the referendum after Barack Obama’s visit.

“That was the only moment when the opinion polls really changed.

“There was an argument whether there was a three or five percent shift in favour of coming out.

“From that moment on we were even-steven.”

“If I had been the leader of the campaign I would have made a speech against other leaders interfering with our domestic policies.